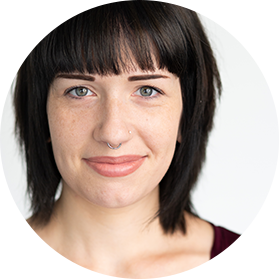 Clarissa Dahlhauser has her Bachelor of Arts in directing from Columbia College Chicago and moved to the area shortly after graduating in 2014 to pursue her passions of directing, acting, and teaching. Some of her favorite directing experiences include Shakespeare’s “Macbeth” at Starlight Theatre, “Little Women” with Pec Playhouse, and both her radio drama and 24 hour play festival experiences with Eclectic Full Contact Theatre of Chicago.

Favorite acting credits include Judas in Godspell, Curly’s Wife in Of Mice and Men, and Abigail Williams in The Crucible. Clarissa is also on the Board of Directors for Babes With Blades and has worked as a private acting coach for over 10 years. From performing in music videos to singing at weddings, there is truly never a dull moment, and she likes it that way! Many of Clarissa's talent have been on Tv shows, Movies, & Print Ads!